Its been a while since we've had a Mistress update, mainly because the wind has kept the Whitby Charter Boats tied up more than they've been out.
But, hopefully good weather is around the corner as the fish are out there and starting to feed hard after spawning.
While still uptiding in January, one trip saw us just three of us boating between 50 & 60 codlings. 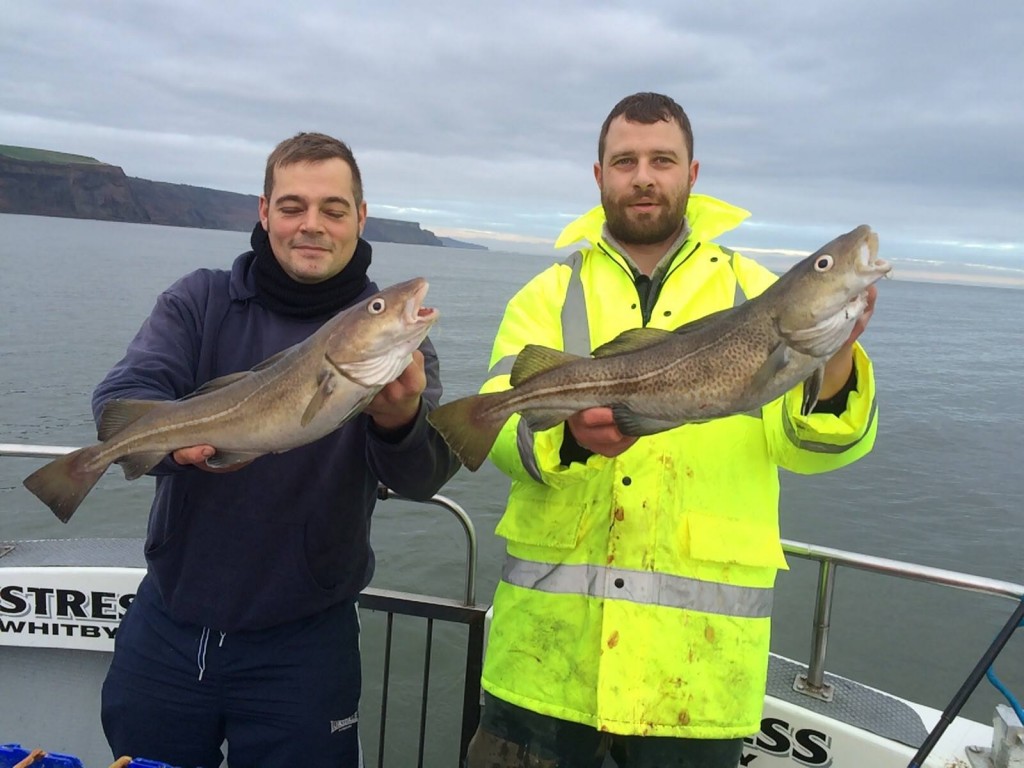 Nothing huge but most around the 2-3lb mark with a good few pushing 5 / 6lb, our best angler had 22 himself! 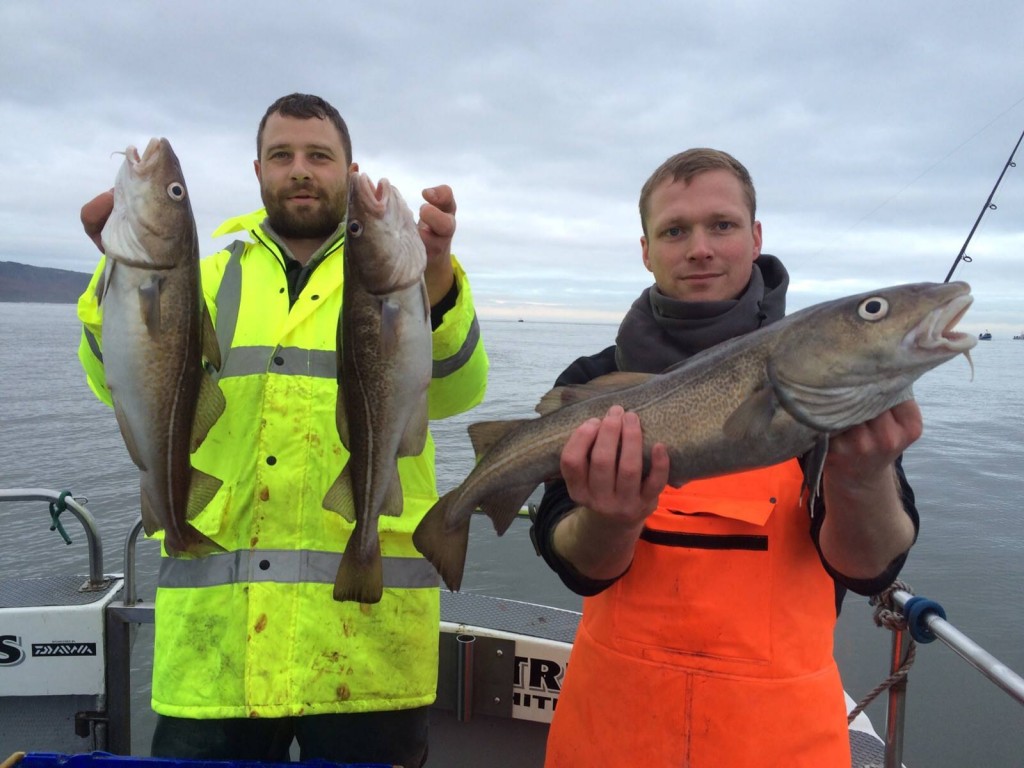 It was late January when we eventually got out again and once more we were back on the cod, despite it initially being hard work. 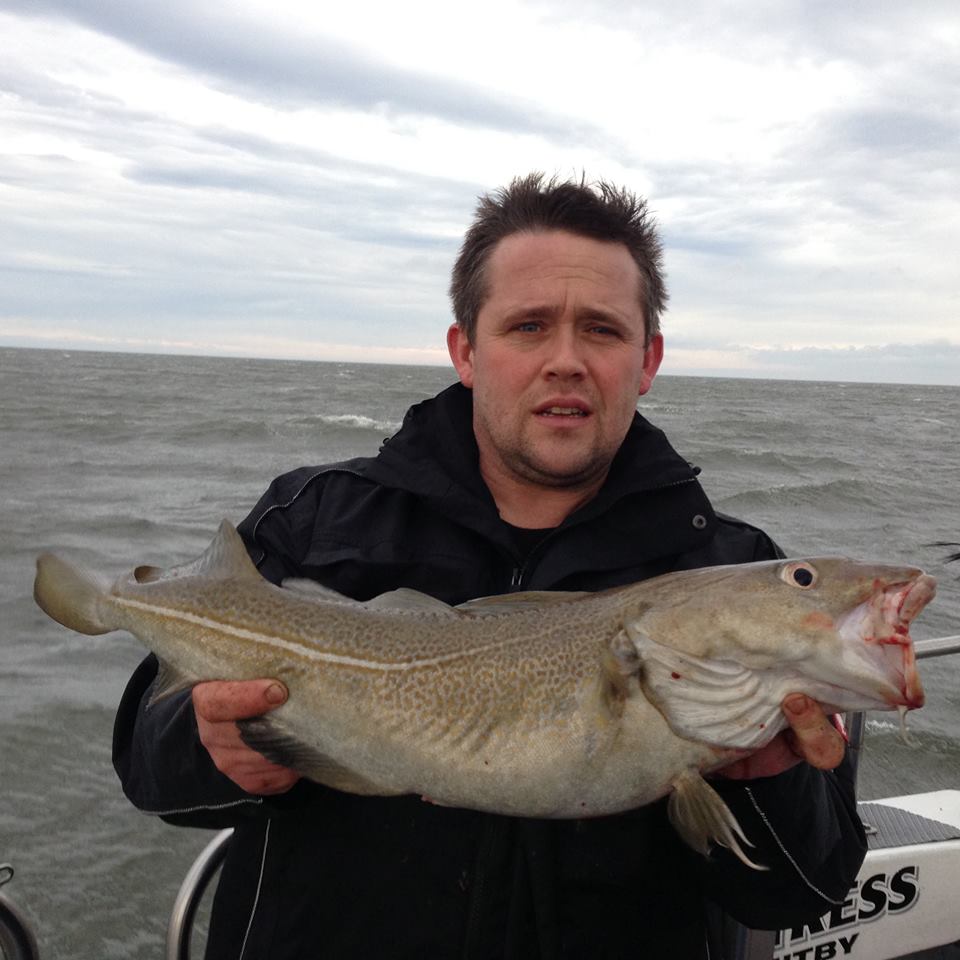 The biggest went maybe 6lb most in the 2lb-4lb bracket, and a few chuck backs, the best angler took 14, the rest of the lads managing 8-9 fish apiece so we ended up with just over 50 cod for the day.

When weather allowed we continued with the uptiding, but come March and a window in the weather it was time to have a look at the wrecks.

As forecast it was a shabby start this morning, with the cruise out to the wrecks steady. We tried a few different marks to break the journey up on the way out to one of my favourite early season wrecks.
Whitby wreck fishing can be good at this time of year so all the anglers were eager to see what they had in store for us.

We arrived at around 10am and started hitting the fish steady away 3 to 4 a drift, although we tried shads they were preferring the squid baits offered on paternoster rigs. 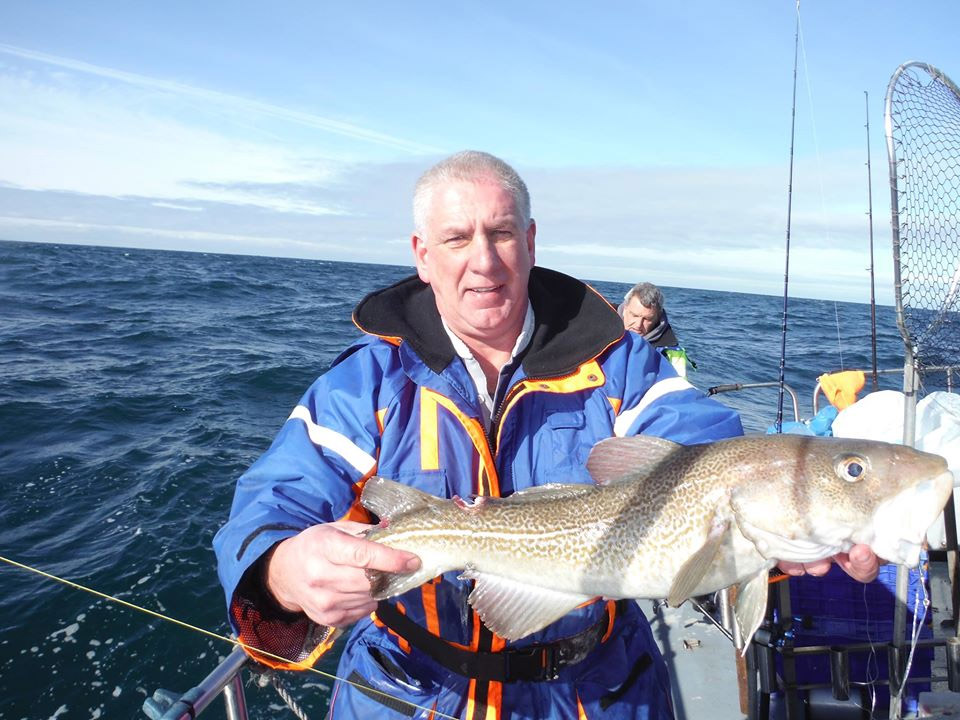 The fishing remained steady until the turn of the tide and went of a bit then. But not before we’d taken a good number of fish for our anglers. 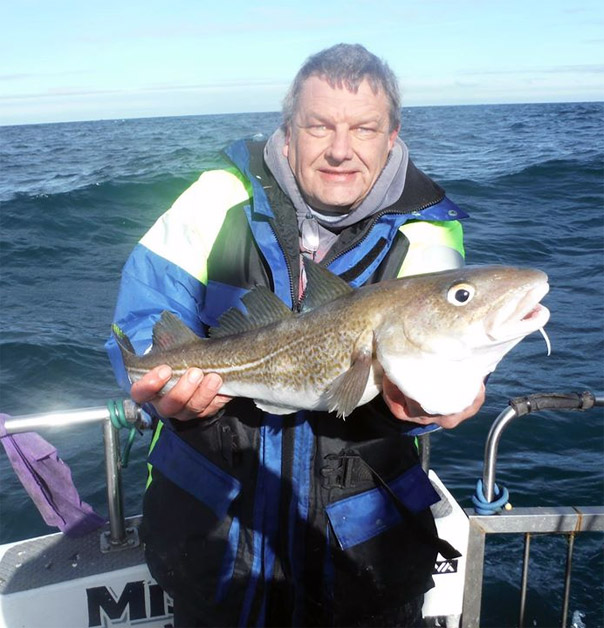 We took mainly Cod but a good few Lings came aboard too, the biggest of both falling to Mistress regular Martin Hoole. 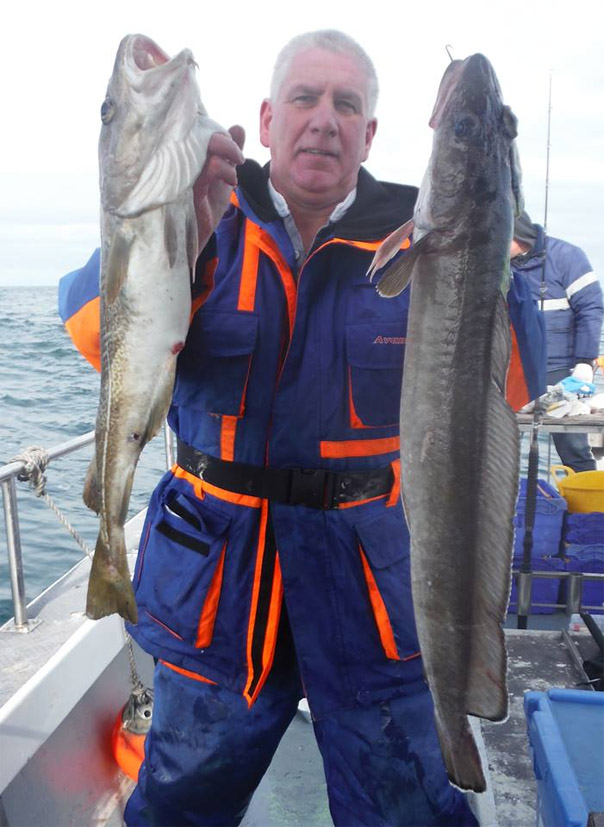 His biggest Cod would of been in the 5-6lb region and Ling around 8lb.We Finished up with around 60 fish for the day, the two best anglers boating 16-18 fish apiece. 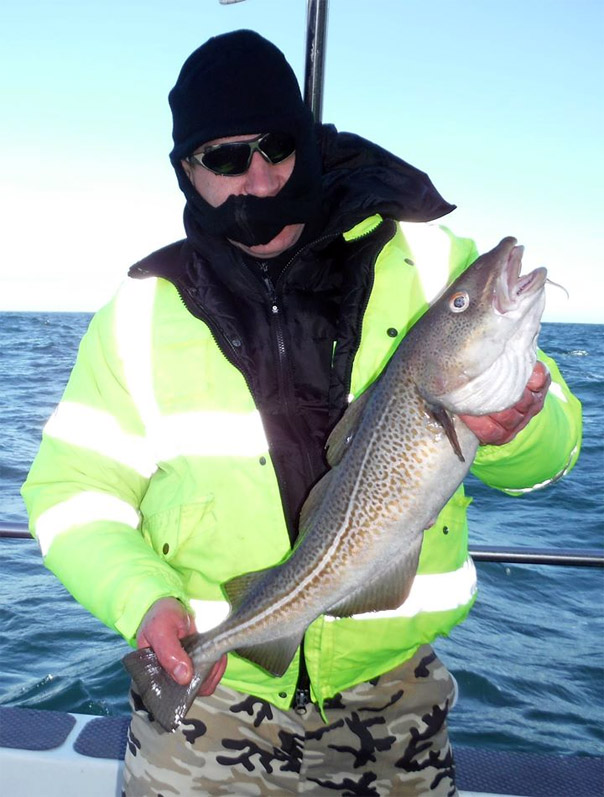 Personally I fished Like a lettuce and boated 7, 3 of which were milting as I pulled them from the sea so returned them immediately, The other lads also returned a good number of fish to fight another day. 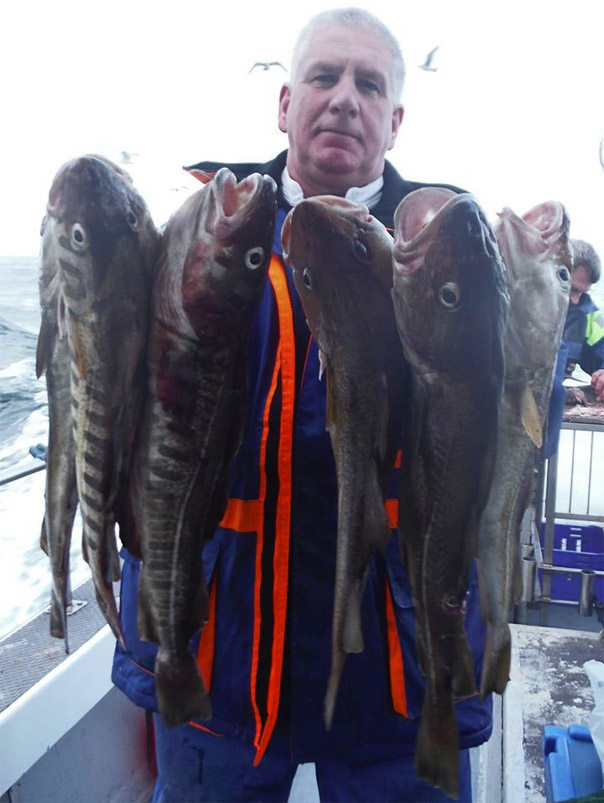 We got out again on 23rd March and massive tides at Whitby meant that uptiding was by far the best option. 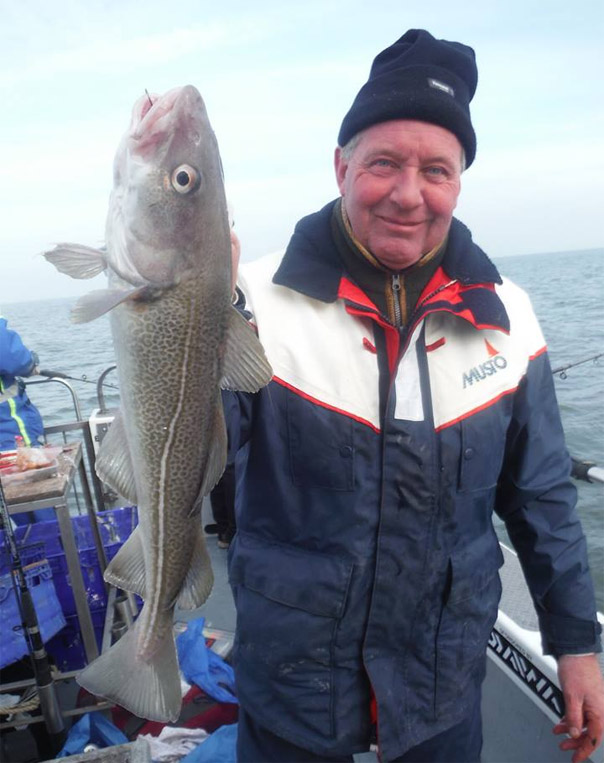 Our first spot gave up a few codlings as we finished the flood and went into slack water, the bites dried up completely so I had a run off a few miles to see if we could tempt a few fish to bait or shads but a combination of coloured water and the big tide meant we just lost gear! Nothing ventured and all that!

So we steamed back inside and got the anchor back back down, the fishing really was slow on the ebb tide, despite moving all over trying different spots and different baits we just weren't hitting them, a few undersized codlings, pouts, whitings and a doggy were all we could muster.

In all honesty I thought about calling a short day, but the tide at this point was about to turn so i sat it out a bit longer.

As soon as the flood bent though the rods started bouncing, so with a couple of hours of the day left we sat it out. 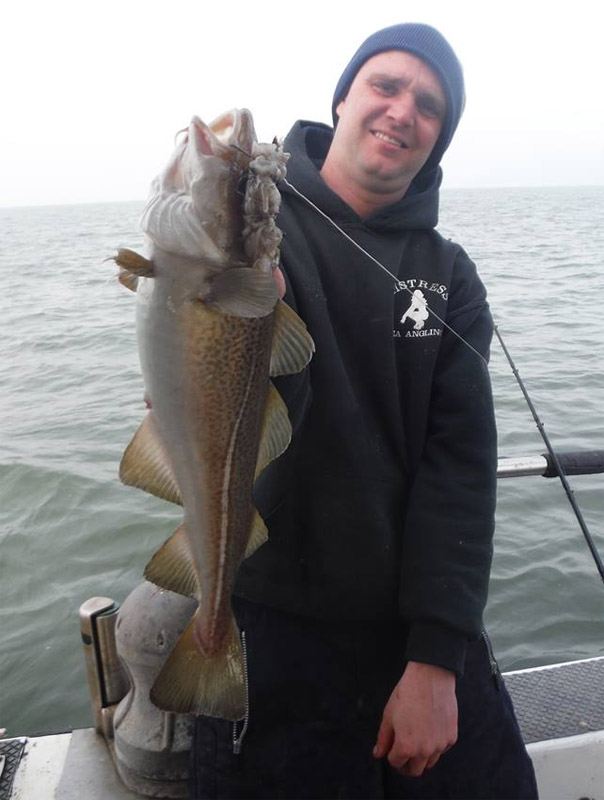 Moving to a ground edge I like we took a steady picking until home time and everyone got a few cod to take home, finishing up with around 20 codlings and the usual bleggs and a doggy. 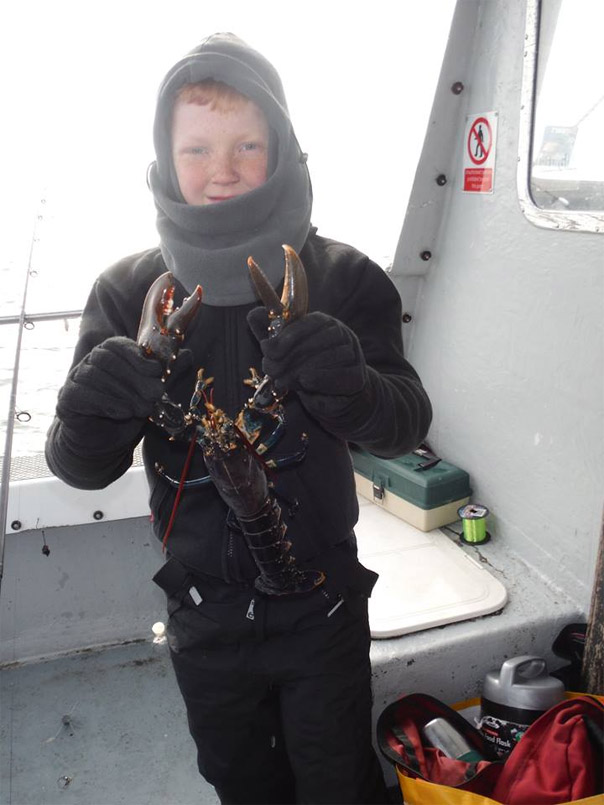 Nothing huge but a good few pushing 4lb, and a bonus Lobster for myself, a couple of the lads caught undersized Lobsters too that were returned.

On March 29th we decided to have another crack at the inshore wrecks, which we soon found out were starting to fish.
These wrecks around Whitby can give some fantastic boat fishing, so as a few fish started coming up we hoped for the best.
At times we were plagued with pesky seals that kept stealing the fish off the lads as they hook them or while they’re being wound in, but seals ain't daft and they know where the fish are! 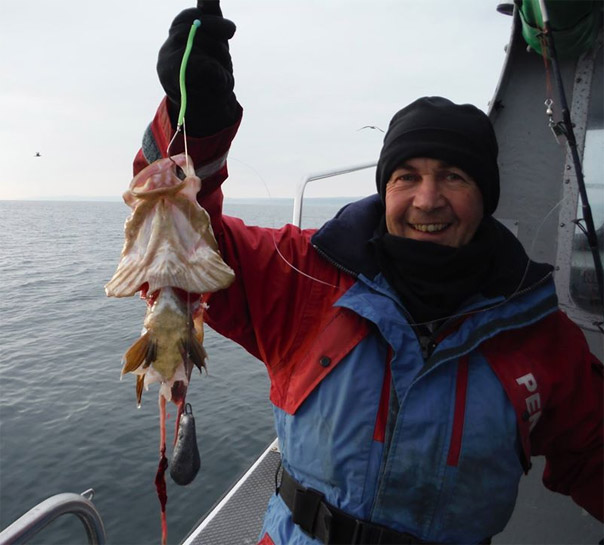 As we have moved around the wrecks, and got a bit further offshore the lads that have persevered with the shads have been lucky enough to snare a few codlings on them, but bait was the most consistent. 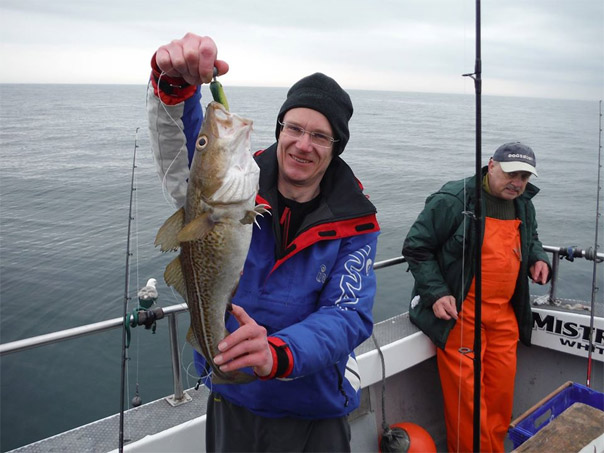 We saw quite a lot of Lings too as we always expect one or two of them while bait fishing.
This time of year we don’t normally experience the bigger ones we get in the autumn but fish like this one Mistress regular Ivan Davey from Nottingham is holding were fairly common, with us experiencing a few of them daily. 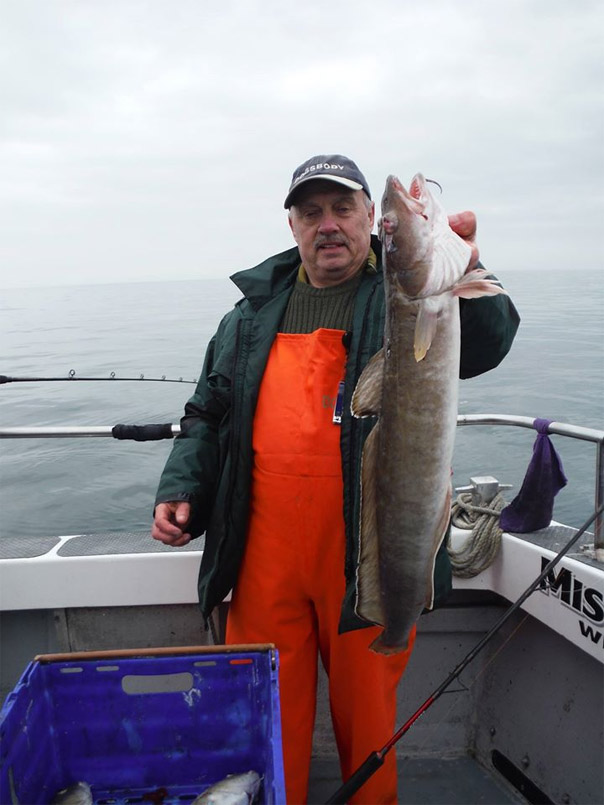 We also had a surprise haddock too- great too see them this early. 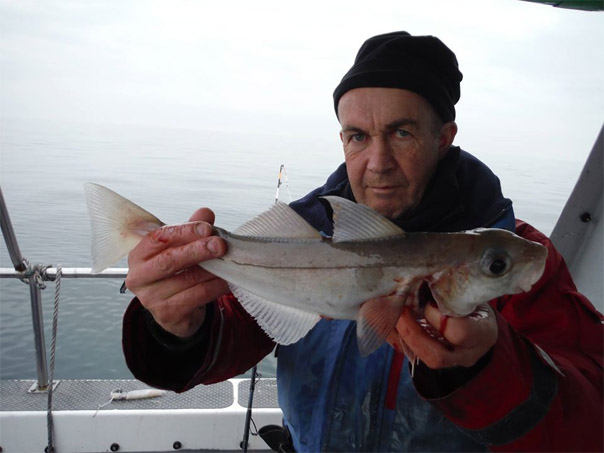 The only other run off we had that week saw us kick the day off with some uptiding, then went wrecking as the weather got better. 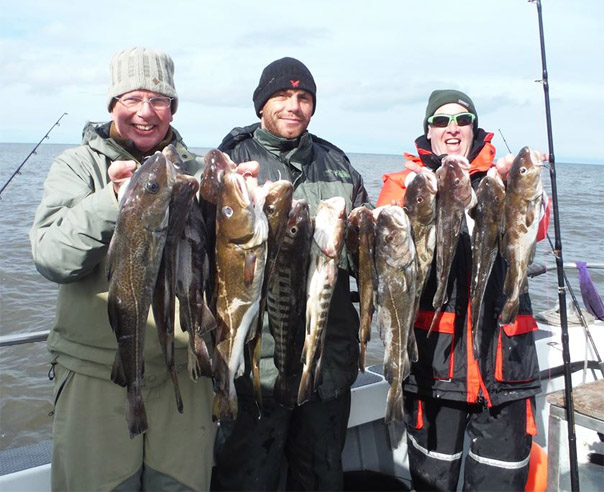 As you can see they all bagged a few fish, and took a nice bag of fillets home each.
The uptiding was showing signs of slowing down now, but the wrecks were starting to get going.

As we moved into the Spring Festival massive tides and sulky fish made things very difficult for everyone.
However, we knew that at this time of year they can come on in an instant, so undeterred by a few difficult days we headed out to the wrecks again.

We started off fairly close to land trying assess the water clarity, there was a sudden change between 3 & 5 Miles, but the with the breeze behind the tide we were drifting at 1.8 knots!
We pushed further offshore to a patch of ground to find even clearer water and less tide, this paid off for us, first drift saw Cod & Pollock coming aboard to bait and shads. 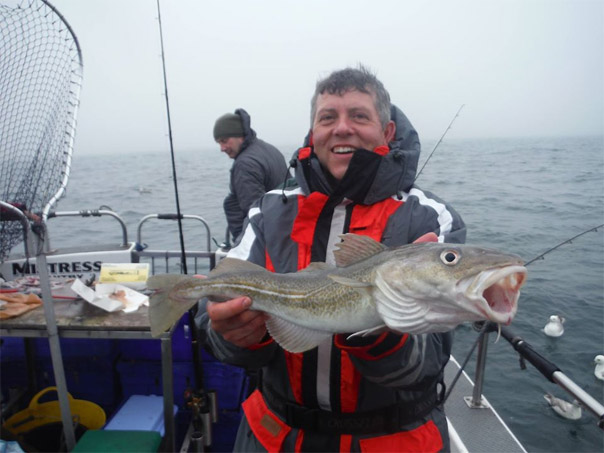 The fishing slowed down a bit on the ground as the tide started easing so a quick move to a wreck nearby saw 4 rods into fish on the first drift through. 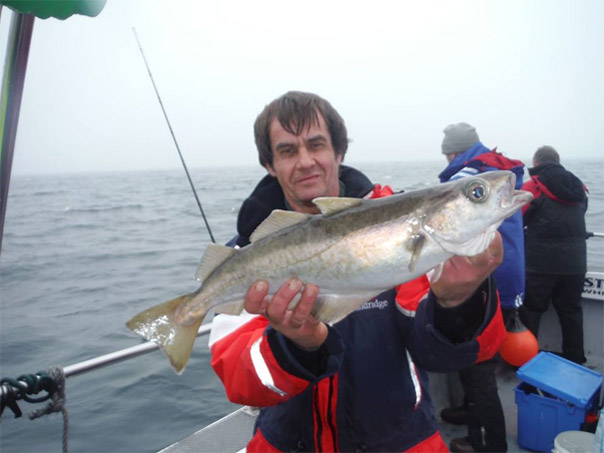 Mistress regular Neil from Burton found success with a 4” white sidewinder sandeel and really couldn’t fall off getting fish every pass over the wreck.
The fish were spewing sprats up all over as they hit the deck. 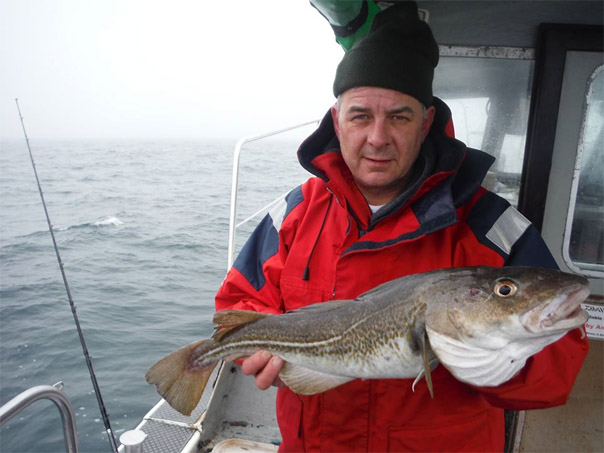 Neil nipped downstairs for a call of nature and I couldn’t resist grabbing his rod for a cheeky drop!
Its the first time I’ve had a dabble with a shad this year, but it didn’t take long to find my rhythm! a bit of a jig followed by a slow retrieve saw his rod buckle over to a nice conditioned codling. 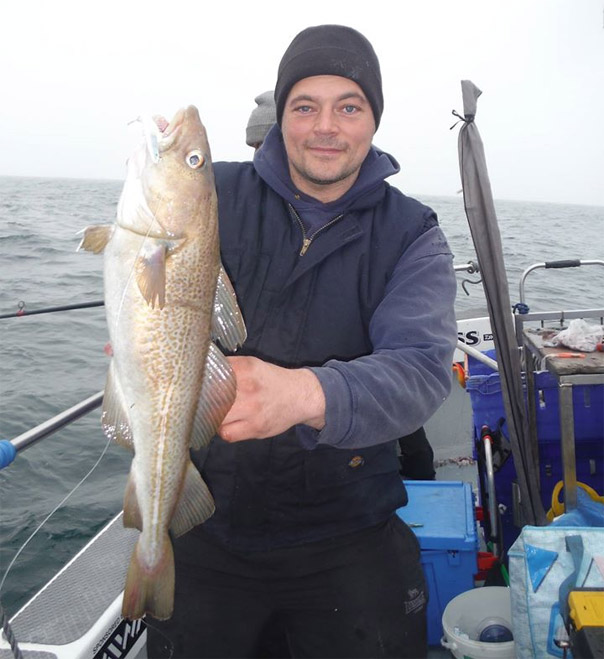 The sidewinder was doing the damage alright! A few of my regular anglers had also switched to shads, they were all using the same pattern with success, most of them carry a pack of the white sidewinder sandeels in their boxes!

The tide continued to ease towards slack water, my regulars know this usually means big fish time so switched to big squid baits to try tempt some better fish, As I cast my eyes round the deck I could see Rich’s rod with a healthy bend in it, he boated his best fish of the day with a nice cod around 6lb, then followed up with another just under that size the next drift! 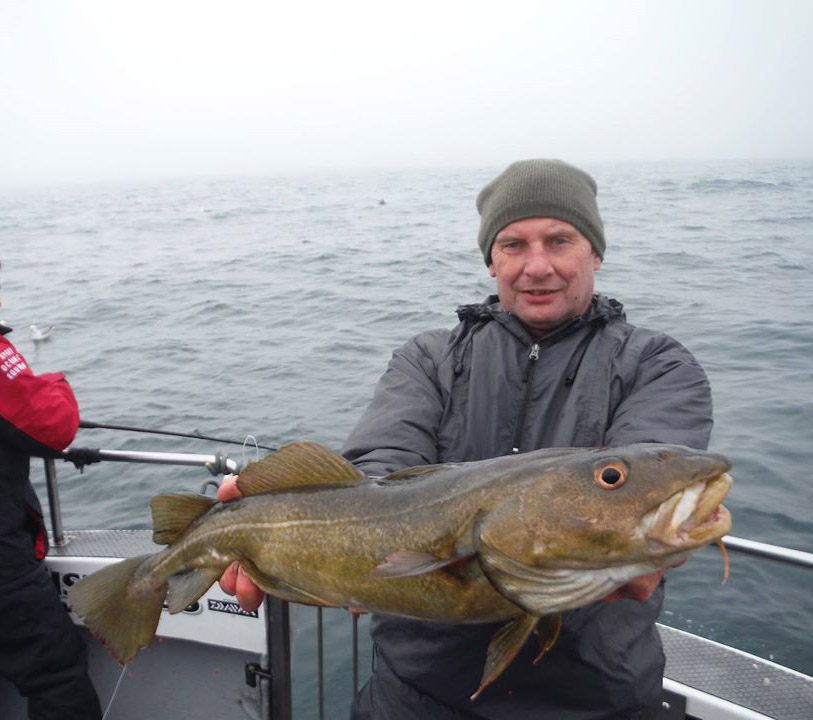 The good fishing continued through slack water and well into the ebb, with us getting multiple hook-ups every drift.
The tide was now going the opposite direction to the wind so we were being held in position with a very slow drift.
We started moving closer to home dropping off first on some ground then onto a wreck that usually produces quite well early season, we carried on nailing them even the last drift saw another couple of cod landed. 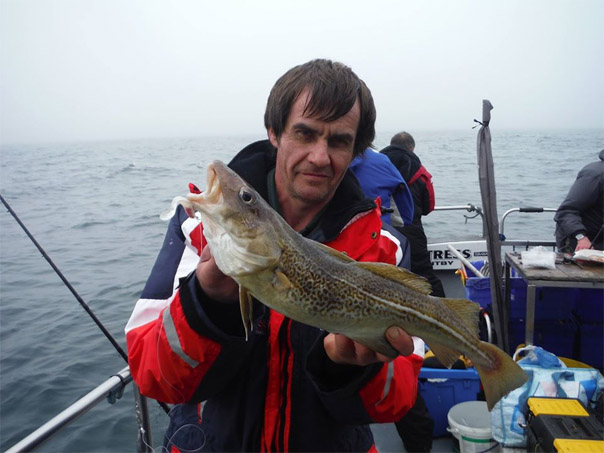 Given breaks in the weather we will be looking to sail most days and the fishing prospects are rather good.
With clearing water, increasing amounts of bait fish and cod & pollock feeding hard some good bags of fish are on the cards.
For all enquiries and bookings give me a call on 07977 436903, E-mail: seafishingwhitby@hotmail.co.uk or drop me a message on my Facebook page, Mistress Sea Angling Charters

View all posts by: Rich