What We Catch At Whitby

A Guide To The Fish We Catch While Whitby Boat Fishing

In our years as a Whitby charter boat we have caught a number of species.
While we do get the occasional oddball and surprise, there are certain species that make up the bulk of our catches and a few others that generally turn up a few times a year.
Here we have listed some information on the main species along with some advice on methods you can use to successfully target them while boat fishing at Whitby. 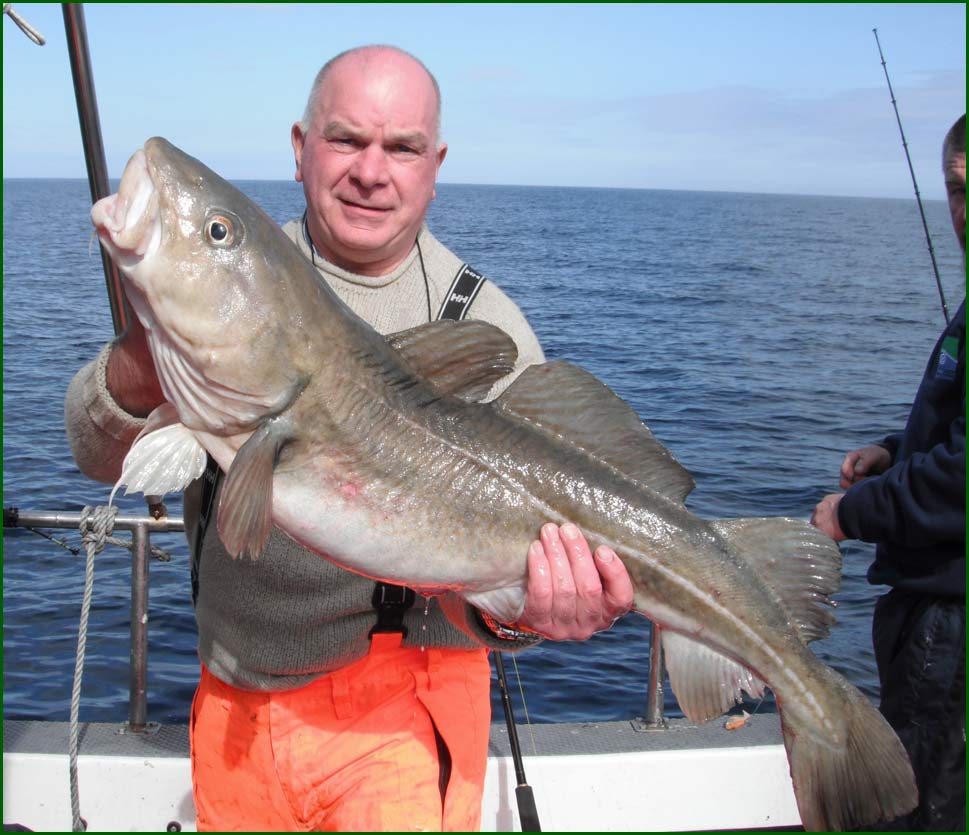 The main species targeted by Whitby boat anglers, cod provide all year round sport.
During Spring, Summer and Autumn we fish for them on the wrecks, reef and ground off Whitby while during Winter we fish closer to shore using uptiding tactics.
The average size can be anywhere between 2-8lb depending on that years class of fish but we have plenty of 10lb plus fish every year along with some over the magic 20lb mark.
If you like to dream, then the British Record cod was caught off Whitby in 1992 weighing an amazing 58lb 6oz!

Lures To Use: 4" shads in blue, Fire Tiger, Rhubarb & Custard, orange and white. 6" Sidewinders in various colours, orange twin tails, Daiwa D Swim Shads.
Hokkai's in orange or green can work well when baited if the water is a little dirty.
Pirks are often overlooked but in certain conditions can fish very well. Choose the ones that weigh 10-12oz and substitute the treble hook for a single hook with muppet or gummi mac. 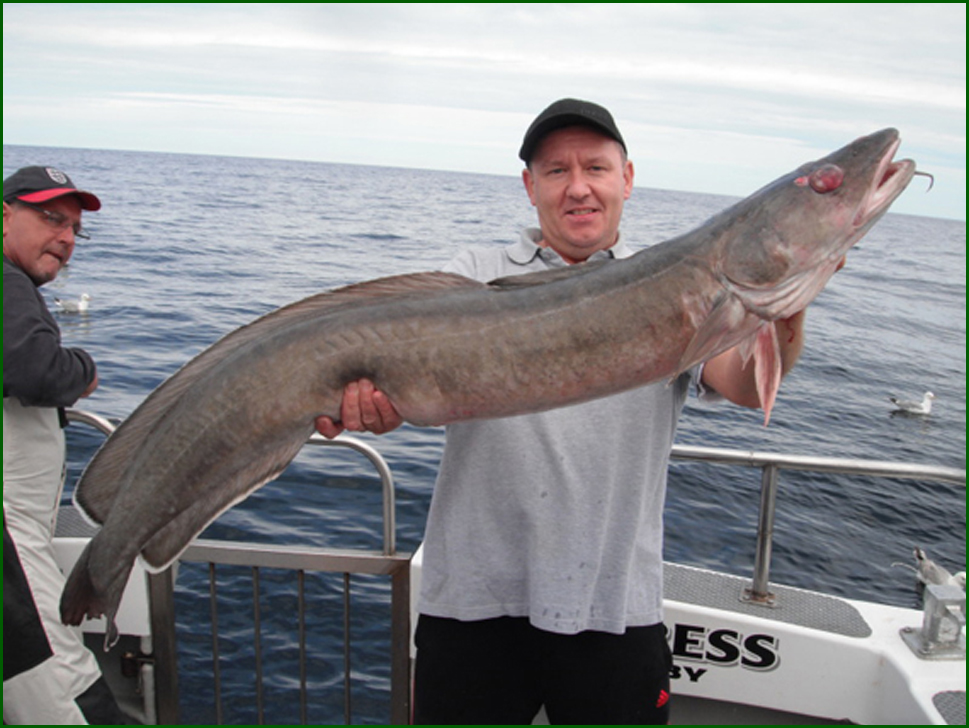 A very common catch from Whitby Charter Boats, Ling tend to be caught from wrecks and occasionally from patches of ground.
Often targeted during Whitby Angling Festivals, we land ling of over 20lb every year and have encounters with even bigger ones.
They come into their best in terms of size from August onwards, with September and October seeing the bigger specimens caught.
Despite their eel like appearance, ling are a member of the cod family and are superb eating.

Best Baits: Nothing beats mackerel- either a whole fillet or head & guts together. Squid comes a close second. Whichever you choose- fish it on a strong and sturdy rig constructed from mono of at least 100lb and with a suitably sized hook.
Watch the following video for instruction on how to make such a rig.

Lures To Use: As stated earlier, mackerel or squid give you the best chance of catching ling as they just love fish baits.
They will take shads but have a habit of biting through the 40-50lb trace used while shadding.
If you had to choose a lure for ling then a baited pirk would be the best choice. 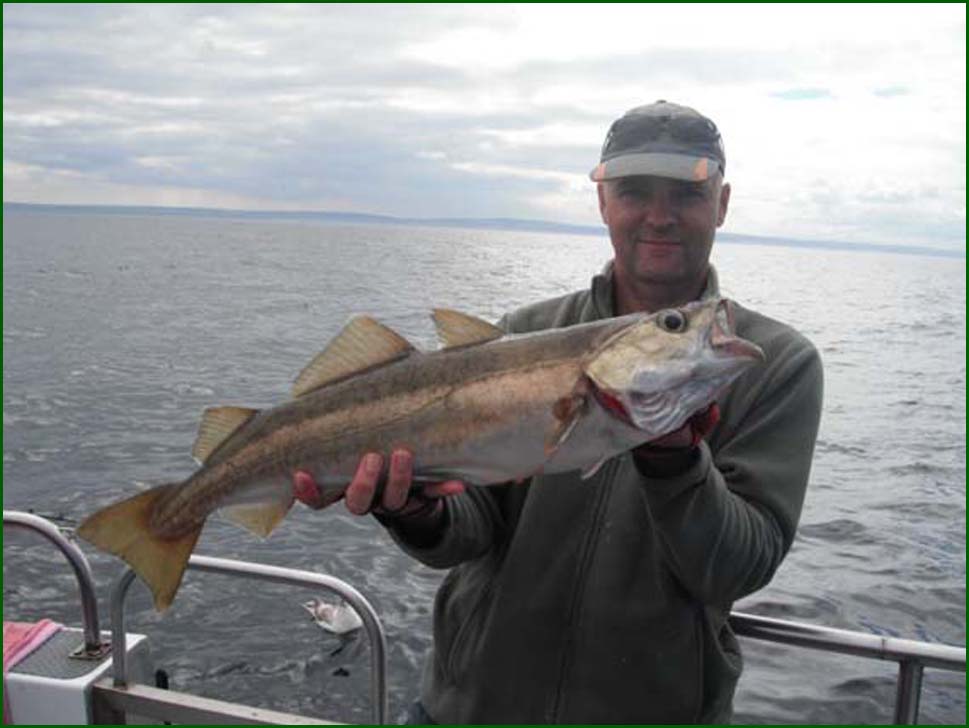 A fantastic sporting fish that is relatively abundant in the waters off Whitby, Pollock punch well above their weight.
With an average size of between 3-12lb and specimens in the 14-16lb bracket every year off Whitby, these fish provide terrific sport on relatively simple tackle.
They tend to sit higher in the water than cod and can often be caught on lures as far as 30 turns from bottom.
Great sport on rods of 12-20lb class, they love lures and are also great eating, meaning most anglers are over the moon when they start coming on board.
Just don't forget to set your reel drag as when they enter their trademark powerful dives you will need to give them line.

Best Baits: We tend to use lures for Pollock but squid, ragworm and sandeel have all caught Pollock on board Mistress.

Lures To Use: Soft lures all the way! 4" shads will catch Pollock but Sidewinder eels tend to have the edge. Red Gill and Eddystone Eels work very well but in our experience a black & red jellyworm on a long trace will beat the lot when Pollock are taking. 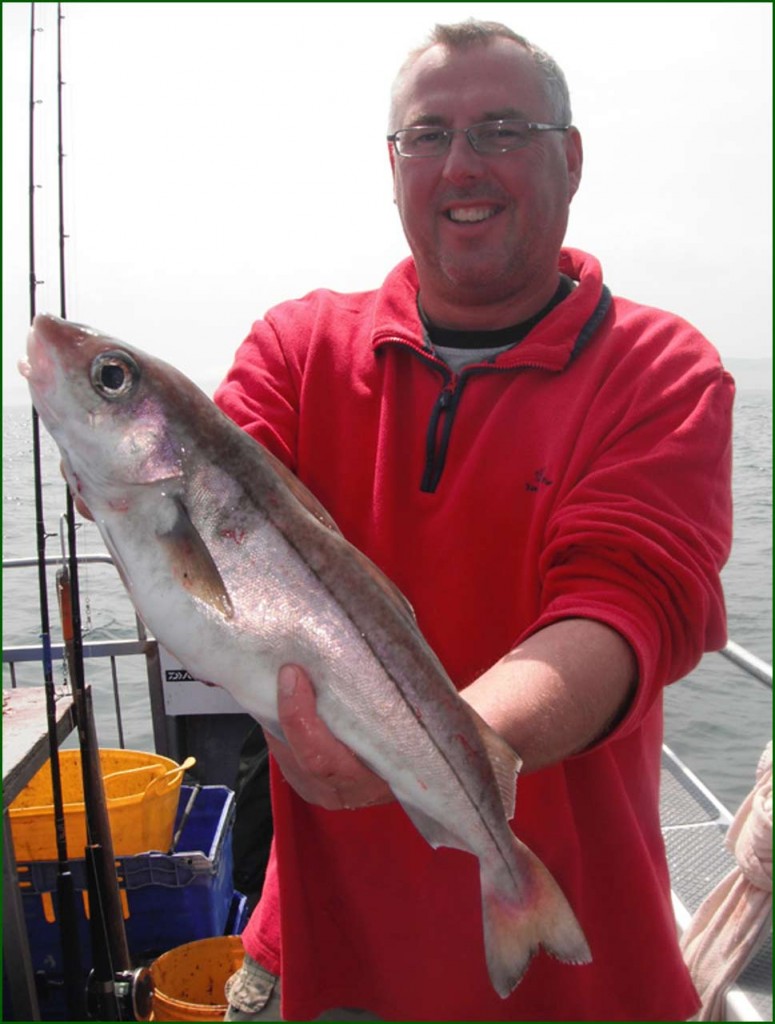 Haddock are always a welcome catch due to their excellent table qualities and we catch them off Whitby between March and September.
When they are present they tend to come up in decent numbers and here on Mistress we have a few marks where we know they will generally be.
We generally catch them on multi hook bait rigs with smaller hooks than used for the larger ling and cod.

Best Baits: Thinly cut strips of squid and mackerel are the favoured baits but tipping with mussel can often do well. Worm baits will work too if presented correctly.

Lures To Use:
Leave the soft rubber and pirks at home- Hokkai's and daylights are order of the day and will be a lot more effective if baited with squid or fish strip. 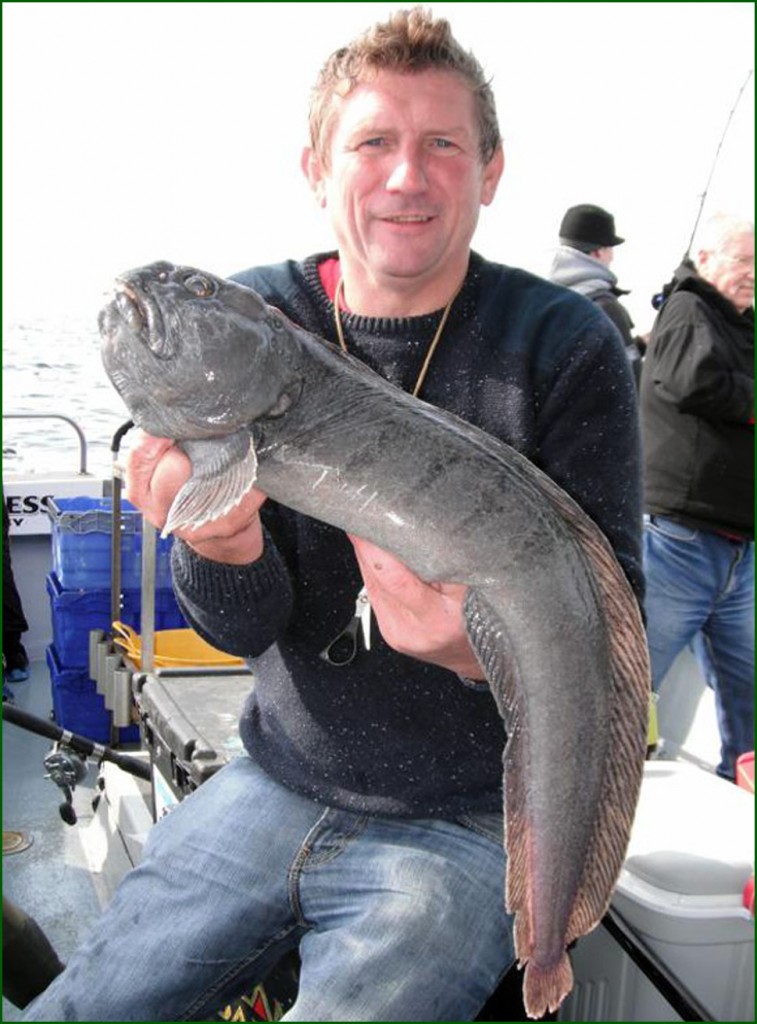 While these fish would never win a beauty contest, they are rated as on of the best eating fish there are.
We get a few every year, with Late Spring/Early Summer being the peak time for them being caught.
Always caught on bait intended for other species, they are generally between 4-10lb but the British Record was caught off Whitby in 1989 and weighed a clonking 26lb!

Best Baits: Nearly all the catfish caught on Mistress have come to full squid baits.

Lures To Fish: Its not really worth using lures to target catfish. 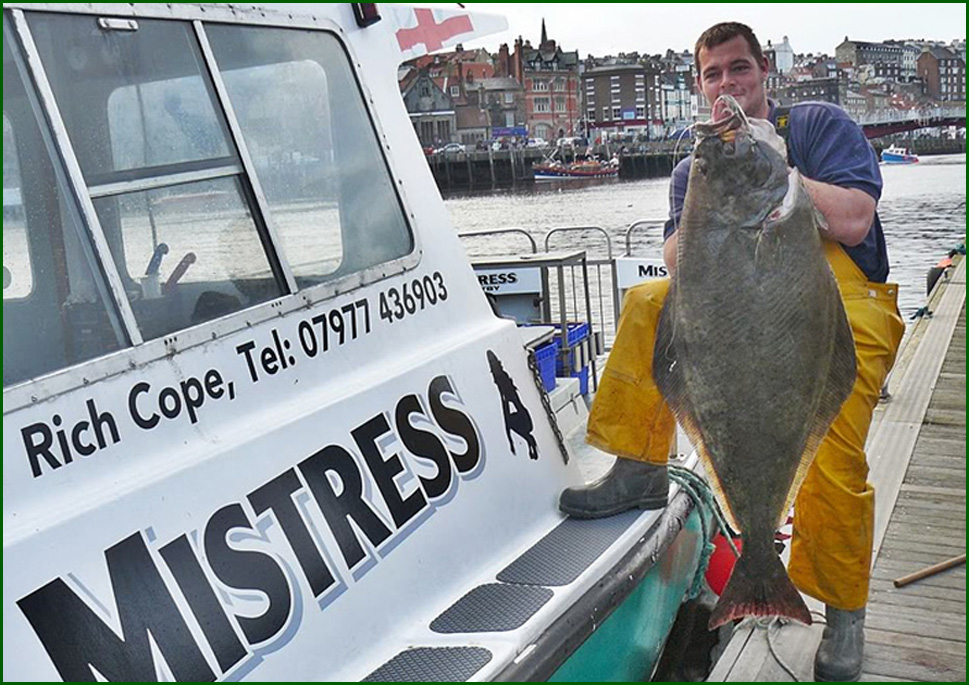 The dream catch for anyone boat fishing out of Whitby!
We have had numerous halibut on Mistress including the pictured specimen caught by skipper Rich Cope that weighed a colossal 56lb!
Its hard to predict when they will turn up, but we've a good idea of where they will turn up.
Few people are prepared to spend a full day targeting them but if you want to discuss it then give us a call.
If you're fishing big baits for big fish and your reel starts screaming, chances are you're onto a halibut so play it nice and carefully- you could make the angling headlines!

Best Baits: Big squid baits and large fish baits such as a mackerel fillet put you in with the best chance.

Lures To Fish: If we're honest its a big bait that puts you in with the best chance!

Other species we catch include gurnard (tub,red & grey), mackerel, coalfish, pouting, herring, rays (spotted, thornback), sole, plaice and porbeagle sharks (Up to 350lb our specialist sharking trips), but these are the core species and species that people hope for while boat fishing out of Whitby on Mistress.

If you want any more information about our trips or want to discuss a trip to target a specific species then please give me a call on 07977 436 903.